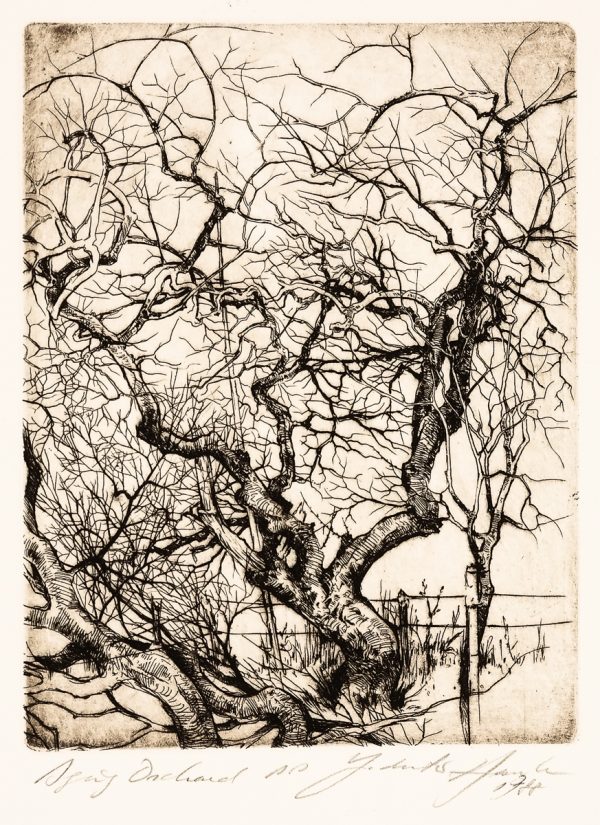 Condition: Fresh from artist’s studio, no issues to report

Ladislav Hanka was born in 1952 to parents who emigrated to the US from Stalinist Czechoslovakia. In his own words:

I have academic credentials, but I backed away from that world long ago: There is an MS in zoology; MFA in printmaking and some years of study in Germany, Austria and the Czech Republic. I apprenticed with an engraver of stamps and currency in Prague and might have been a counterfeiter, but for the dreariness of spending one’s days making money.

He is a printmaker, draftsman and bookmaker who portrays the natural world with intimate knowledge and rare authority.

There is something so human, so right about apple orchards. Every abandoned farmstead from the dustbowl has an apple tree upon which to rest one’s eyes. Relaxing beneath its shade, I fall into speculating about the families long gone – begin to sense their lingering spirits. Around the shores of Lake Superior, the former inhabitants of now mechanized lighthouses and abandoned fishery camps often left behind currant bushes, rhubarb patches and always apple trees –  unnamed varieties of tart cooking apples that have never tasted of pesticides.

For years I’ve driven past a nearby Centennial Farm, one that has been under the care of one family for at least a century. The ancient apple tree growing near the house kept beckoning, and I kept intending to pay tribute to its beauty.  So often one intends to do the right thing, until it’s too late – the child has grown and left, the elder has died or the ancient tree has succumbed to lightning. This spring, I went back to look, and, fortunately, the aged apple tree was still there. Throughout April, nearly every other day I drew a new feature of the striking tree, amazed that it has put forth blossoms for yet another year.

Many artists have their mountain, their pond, their cathedral or their beloved, whose visage they record from youth into age, and in every and all weather, creating a testimony of their passing that confirms and explores the many aspects of the one.  Here is an apple tree that would sustain just such an effort. If only it would survive another year… 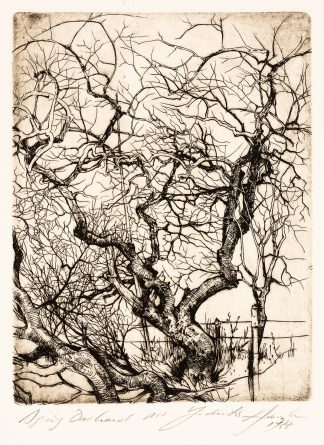