Henry George Keller (American, 1869–1949) was born at sea off Nova Scotia to German parents. He studied art at the Cleveland School of Design for Women (later named the Cleveland Institute of Art), The Cincinnati Fine Arts Academy, and the Art Student’s League in New York. He also studied animal painting at the Karlsruhe, Germany, Art Academy. During these years of training, he also designed circus posters for the W.J. Morgan Lithograph Company in Cleveland. Beyond his career in painting, drawing and printmaking, Keller was an influential teacher.

Other impressions of Cart Horses Resting are held in collections including The Cleveland Museum of Art and the Cleveland Public library. 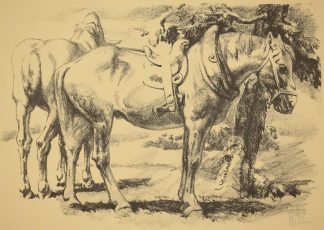